The tree of contention

The day grandma got sick I was still a child. The priest came round and they spoke alone in her bedroom. It was a difficult discussion. At some point we heard her shout and when we burst into the room she said: “Nobody is to touch that tree. The priest asked me to cut it down but I never will!”. This is one of the most vivid childhood memories I have. The tree had been planted just before the turn of the 20th century, in the autumn, by my mother aged twenty. It had been placed at the far corner of our garden to trace the limits of our property, as people used to do in those days. It grew straight and tall and that’s when the problems with our parish started.

In the beginning it was only a matter of small rows due to the leaves falling right at the church entrance creating a yellowish mass: it was beautiful to look at but for some it was clearly a nuisance. In order to avoid discontent, I used to be sent to sweep it up with the help of other children. Then its crown grew so broad then it darkened the kitchen of the parish. This marked the start of a love-hate relationship between Father Schierano and our tree. He was a man of great intelligence and a friend of the family. In the summer the tree was greatly appreciated as it blossomed heavily and fed the bees with its flowers. As children we’d be encouraged by our parents to suck the honeycomb, it was a huge celebration. At other times, the tree turned out to be a hassle: the memory of grandma shouting at Father Schierano dates back to one of those times. Other ministers came along and their relationships with our tree had their ups and downs.

Piero Gagliardi followed Fr. Schierano. Gagliardi was a young priest who loved playing with the children. Thus the tree enjoyed a little break from rows. Except when we had to have electricity and phone cables placed along its path. With the current minister, Fr. Giuseppe Torta, things started on the wrong foot. At the beginning he revealed himself to be extremely hostile towards the tree and some fighting did take place… With my grandma gone, it was my dad’s turn to defend it. He fought very hard, he was a soldier, so battling was in his blood. He deeply loved trees. When he was young he had studied Natural Sciences and he brought us back a herbarium from China. He always followed it with great care. He become the tree’s most precious ally and honest protector. Meanwhile though, the tree kept growing taller and making the priest’s house darker and darker. In the end, out of mere exasperation, Fr. Torta moved the kitchen to the other side of the building where he could finally enjoy the benefits of the morning sunshine. Things turned out for the better.

Nowadays this tree doesn’t appear to be a source of separation for the village anymore. On the contrary, it unified it as it ended up becoming its symbol. I wish it could be safeguarded by some kind of conservation policy, as men are so good at creating snares. When I close my eyes, the first thing I see when I think about my holidays spent in Villa is our tree. It always reminded me of home and peacefulness. When I was young I always used to read in the shade of its branches. And despite having lived in Rome and abroad, I always strived to spend the hottest months of summer in its shade. It rustled in the tramontana wind as if to warn me that the cold months were on their way.

I wish to thank our tree for its presence and for giving me the sense of escape I inherited in my childhood. Then I had the illusion that the country fields, with their open space and absolute freedom, would lay just beyond its branches. I could not see the church from my window. Its awe fills me with pride: throughout time it has fought a competition with the church and in the end it has reached its same height, growing to the same height as the church’s roof, creating its own vital space. It managed to reach the sky and therefore taught me how to dream.

When I was a child, the houses in the village were linked by underground tunnels which were subsequently closed down. I always dreamt of the roots of our tree penetrating those silent, secret passages. There have been moments when I feared for it, especially when it had to suffer a few mutilations due to badly-carried out trimmings. I fear for our tree as a mother fears for her son. But it has always managed to spring back up. During all the years I have been around it, has always won its battles. I like to think that it will always be so.

Rosa Cristina Salza (Casale Monferrato 16-7-1919) aka Titti is the widow of the ambassador Giovanni Stefano Rocchi. They lived in Rome, Geneva and Bogotà.

Rosa had a happy childhood. She spent her summer holidays at her grandparents’ house in Villa San Secondo. Her grandmother taught her to trim rose plants and this, along with her father’s love of botany, helped her develop a strong passion for trees and flowers. In their garden, where azaroles bore small red apples, some centuries-old kaki plants still exist. They were among the first ones to appear in the region.

She is passionate about music and literature and she likes giving her loved ones the book: L’uomo che piantava gli alberi (The man who planted trees) by Jean Giono.

Rosa Cristina Salza’s tree stands out on the top of the hill in Villa San Secondo (15 km from Asti), in front of the parish church of Saint Matthew and Saint Secondo. This church is considered to be one of the finest in the Monferrato area. The tree is clearly visible from the valley thanks to its own majesty 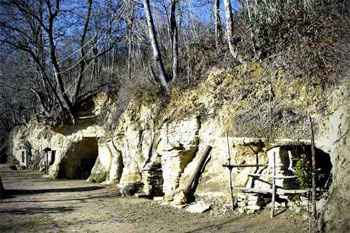 Here we have some typical cave-houses, directly dug out of the tuff of their hillsides, dating back to the 18th century. They were originally used as storage space but were subsequently utilized for primary housing from mid-19th century to mid-20th century due to the sudden increase in population and poverty. Some are extremely well-preserved as it is possible to clearly distinguish the living area from the sleeping area as well as tanks for the collection of rainwater and stables for cattle and poultry. 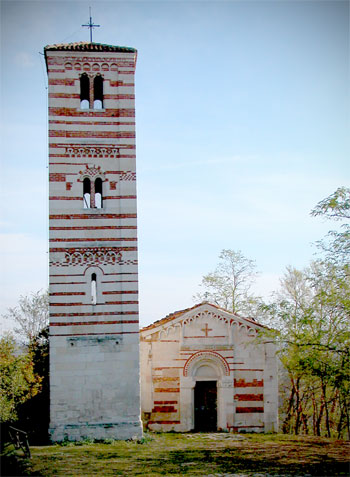 Here we have a traditional Romanesque parish church dating back to the 11th century. Following various stages of refurbishment works it now stands alone surrounded by broad meadows as the hamlet which used to accommodated it has now disappeared.

This Romanesque chapel dates back to the beginning of the 10th century and used to be head to a parish that included the villages of Cortanze, Piea and Alboreto. In the 17th century its status was decreased to that of countryside chapel by the Bishop Roero. It was subsequently refurbished in the 19th century. 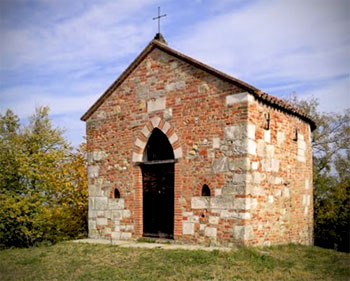 The church of the disappeared village of Piesenzana is mentioned as the seat of a parish church since the early 10th century. It seems that the land assets that it possessed in the area included – around the mid-twelfth century – the churches of S. Michele (adjacent to Piesenzana and subsequently disappeared), of Cunico, of S. Martino di Cunico, of Cortanze and other places disappeared today. Following the transfer of the inhabitants of the oldest towns to the Villa Nova in Montechiaro (1200), the parish fell in importance. At the end of 1297, the chapter of the Canons of the Cathedral of Asti decided to alienate the huge land patrimony that belonged to Piesenzana (Cortanze, Piea, Alboreto). The parish title was transferred to Santa Caterina in Montechiaro. Nonetheless, the church of Santa Maria remained parish until 1662, when Bishop Roero decreed its reduction to a rural chapel, as it was now almost completely destroyed. In the first half of the eighteenth century the church was restored, as the bishop Felizzano found it, in 1742, in good condition, even if it was celebrated only occasionally. At the beginning of the following century the dilapidation of the building was ascertained and – in 1808 – it was rebuilt, while retaining most of the original structures of the apse. Still in 1838 it was in decent condition and needed only some minor repairs. It is believed that the current building originally had a longer hall and the hypothesis of a primitive three-nave layout should not be ruled out. Of the original construction phase, presumable (given the adjective “very ancient” attributed to the choir) and not ascertained, only the apse and some stone blocks, inserted in the walls, remain. Photo: Alessandro Bianco (panoramio.com) – Source: www.valrilate.it 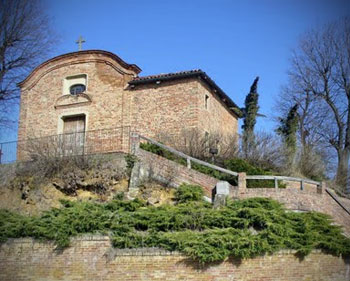 There is reason to believe that this Baroque parish church once belonged to a clerical order dating back to the 9th century. It is said to have then become a subordinate of Montechiaro’s Pieve di Piesenzana in 1345, only to be declared a countryside chapel in 1585. 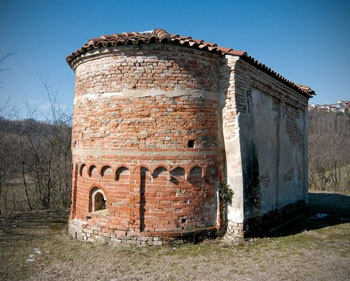 This church is said to have been a subordinate to Cossombrato’s parish church in 1345 only to be downgraded to countryside graveyard chapel. It was placed too far-out from the village for the parishioners to attend regularly, therefore it was used once a year for a service dedicated to the deceased who had been buried in its surroundings. Before being officially abandoned in the 19th century, it enjoyed some popularity around 1695 thanks to Bishop Milliavacca. 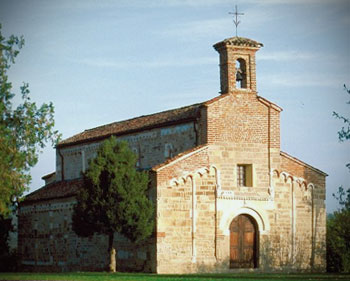 This Romanesque church is documented to have been under the authority of the diocese of Asti in the year 1300 only to become a subordinate of Montechiaro’s parish fifty years later. In 1585 Mass was only celebrated here once a year. The church building stands on top of a hill around a kilometer to the west of the village. Its Romanesque architecture is astonishing with its internal fresco dating back to the 14th century.

Any cookies that may not be particularly necessary for the website to function and is used specifically to collect user personal data via analytics, ads, other embedded contents are termed as non-necessary cookies. It is mandatory to procure user consent prior to running these cookies on your website.